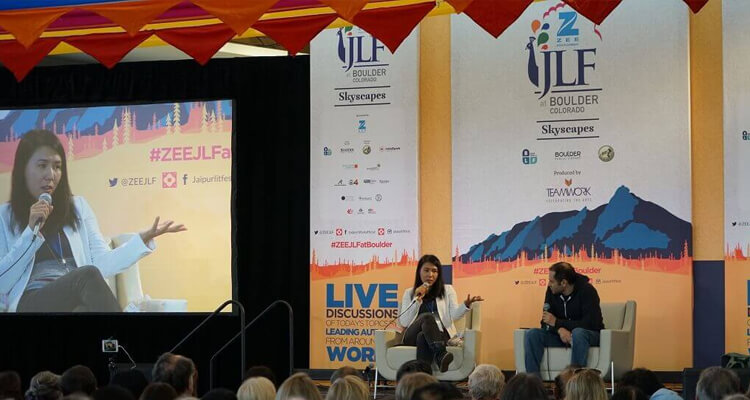 All chairs were filled in the Skyscapes auditorium at the Jaipur Literature Festival for one of the most fascinating and terrifying talks of the day. Investigative reporter Suki Kim spoke to a captive audience on her ten year undercover mission in North Korea.

Kim’s sojourn into the dark and enigmatic state of North Korea was bookended by two auspicious events in the history of the nation: Kim Jung-il’s 60th birthday on February 16, 2001, and his death on December 17, 2011. During her time in North Korea, Suki Kim posed as an Evangelical Christian ESL teacher at a North Korean College. Her book “Without You, There is No Us: My Time with the Sons of North Korea’s Elite” (named after the rather horrifying national anthem of the country which Kim played for the audience at the outset of the talk), captures ten years of systematic oppression, manipulation, and cult-like indoctrination which reads more a political thriller than a non-fiction. Kim said it best herself when asked about the representation of the North Korean situation in modern media: “With North Korea, reality is more fictional than fiction. My responsibility was to vividly and accurately capture North Korea, because no matter what I say, it’s really hard to believe. The surface of North Korea is so brutal and so bizarre, that people don’t somehow see the humanity.”

I could spend the rest of this article rehashing all of Kim’s story: from singing heartless karaoke with the workers party leaders in order to gain their trust and “prove her loyalty” to the “Great Leader” in order to gain entry to the country, to her visits to the fake voting booths and churches throughout the state, to the loss of her uncle and the fracturing of her family which ultimately led her to undertake this dangerous journey. But it would be more pertinent, in this author’s opinion, to leave the readers with a key reflection from the day’s panel as it pertains to the body’s of work examined and discussed throughout this literature festival, and to urge you to read Kim’s memoir for yourself.

During the question and answer part of the conversation, Kim provided a harrowing analysis of the North Korean language and how terminology and choice of language reflects society as a whole. “Korean is spoken in Korea, North and South, but the north Korean language is unbelievably violent,” said Kim. “I think that society does reflect in language. It is horrifying to hear the Korean language spoken in North Korea; a classroom is referred to as a “Platoon” instead of a classroom, the workplace is called a “Battlefield”, the citizens are called “Bullets”. The whole language is about war.”

Though perhaps not as graphic an illustration of the horrors perpetrated daily in North Korea as the images of the gulags or the thousands of people forced to dance in the streets for 12 hours in sub-zero temperatures, Suki Kim’s reflection on the use of the Korean language illustrates in a deeper and more troubling way, the depths to which the cult-like manipulation and systemic oppression have transformed the North Korean people. When language itself has transformed into a dialect in which every person utilizes violent war terminology in place of fundamental societal constructs, it is clear that the basis of the society in which the language exists has been twisted and distorted to its very core.