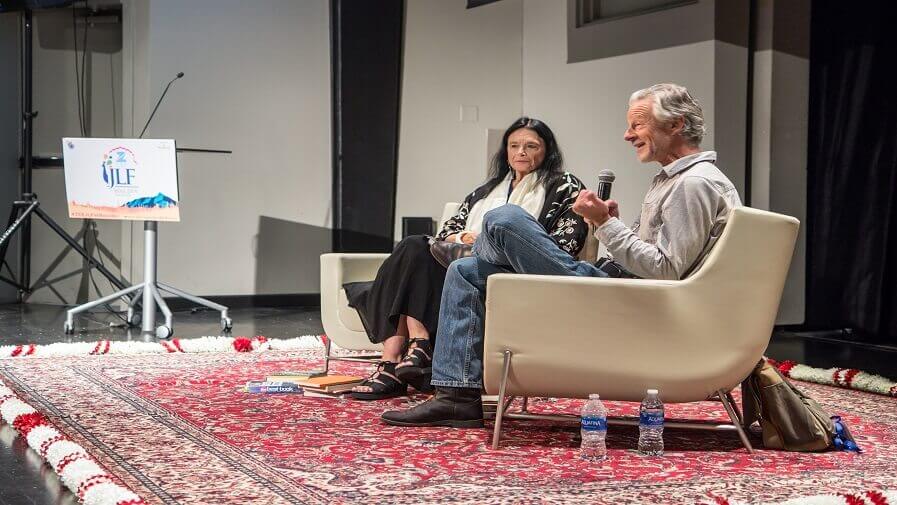 And the Beat Goes On: Anne Waldman on the Power of Language and Social Change

“The Beat movement was not just another literary school. It was an artistic and social revolution.” – Anne Waldman

The third edition of the ZEE Jaipur Literature Festival at Boulder kicked off with a session featuring legendary poet Anne Waldman in conversation with Andrew Schelling.

Waldman is a card-carrying, living member of the Beat lineage. She still writes from that passionate embrace of personal freedom and social revolution.

A poet, performer, professor, editor, and cultural activist, Waldman is the author of over 40 books of poetry, including the book-length hybrid narrative eco-poem “Manatee/Humanity” and the feminist epic “The Iovis Trilogy: Colors in the Mechanism of Concealment”, which won the 2012 PEN Center USA Award for Poetry.

Other recent books include “Gossamurmur. Jaguar Harmonics”, and her latest, “Voice’s Daughter of a Heart Yet To Be Born”.

She is also the editor of “The Beat Book” and co-editor of “Civil Disobediences: Poetics and Politics in Action, Beats At Naropa”, and most recently, “Cross Worlds: Transcultural Poetics”.

Speaking with fellow poet, Schelling, Waldman read and riffed at the Boulder Public Library on the impact of the Beat poets, decades later, on the political and social culture in the US – and all over the world.

Schelling is a poet, eco-activist, translator of Sanskrit. Among his twenty books, his most recent is “Tracks Along the Left Coast: Jaime de Angulo and Pacific Coast Culture”, a folkloric account of Western wilderness encounters, linguistics, poetry, medicine power, and creation tales.

As Waldman wrote in her recently re-issued book, “The Beat Book: Writings from the Beat Generation”, “There is no doubt that we’re living in a free America as a result of the Beat literary movement.” Its members were, as William S. Burroughs said, “real architects of change”.

Waldman and Schelling traced the history of the Beat movement from the 50s to the present. As Schelling recounts, “We used to tell the joke that in the 50s, 3 or 4 guys from New Jersey showed up in California and the critics called it a Renaissance.”

During World War II, the US government had sent hundreds of conscientious objectors and “subversive” artists to labor camps. However, the writers and activists thwarted the government attempt at suppression by writing poetry and producing magazines – so their messages got out to a wider audience.

According to Waldman, the West Coast poets were more influenced by Asian culture, including Buddhism. This had an effect on some of the poets who migrated westward. “Ginsberg and Kerouac both got in trouble at Columbia. Allen was kicked out and went into a mental hospital. Kerouac travelled.”

The best part of the program was when Anne Waldman read us poetry. You can tell she really loves words and she embodied every syllable with passion and life. She read one of the Diana DePrima’s poems, repeating the line,