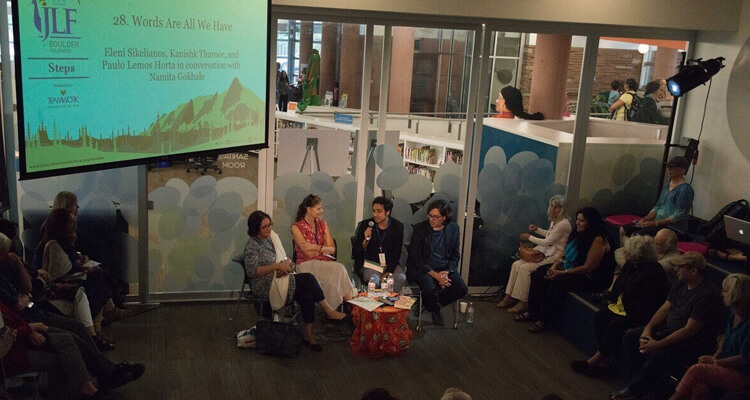 Words Are All We Have

The mystery of how anyone becomes who he or she is can usually be solved only after the fact of their becoming, after the dance between nurture and nature has played out. And so, now, looking back, it seems obvious not only that Eleni Sikelianos, Kanishk Tharoor, and Paulo Lemos Horta became writers but that they became the kind of writers they did—a poet, a journalist-novelist, and a scholar, respectively.

Horta was nurtured on stories about Ali Baba and Aladdin told to him by his mother. His home was filled with Middle Eastern objects that inspired his fantasies of being Aladdin. Thus, he became so intrigued by the Arabian Nights that they informed his scholarship many years later. Alas, in Marvellous Thieves, he reveals that the 1,001 tales were more Parisian than Persian and that his beloved Ali Baba and Aladdin are nowhere to be found in the original. In fact, if not for the influx of stories from other cultures, Scheherazade would have been dead before a year was out. “Orientalists were feeding hunger for the luxury of the East,” he said by way of explaining all the padding.

“I had the great privilege of growing up in a household full of books,” said Tharoor, whose mother was a professor of literature and whose father was a writer. His critically acclaimed Swimmer Among the Stars is a collection of stories that uses language to discuss language. He was read to, very eclectically, from an early age, which may explain why he collects words and languages (he’s got French, Spanish, English, Farsi and Hindi and particularly enjoys reading Old English) the way a philatelist collects stamps. He started banging out stories when he was 8, and although he says his writing now aspires to be lyrical and is more concise, economic, as a young writer he “wrote in a slightly purple, over-the-top way, wearing influences overtly.”

Sikelianos tried to write stories at 7, on her mother’s IBM Selectric, but it seemed impossible given that she lived in Section 8 housing, an environment that didn’t nurture her inchoate literary imagination. It wasn’t until she was hitchhiking around Greece that she picked up a book of poems, one of which was written by her great-grandfather (who happened to have been nominated for a Nobel Prize!) that she realized that writing poetry, being a poet, was possible. She loves to think about the how one phrase can have different meanings—the question Do you mind? Can mean are you obedient or do you care. “That’s so much what poetry is—that proliferation of possible meaning,” she said.