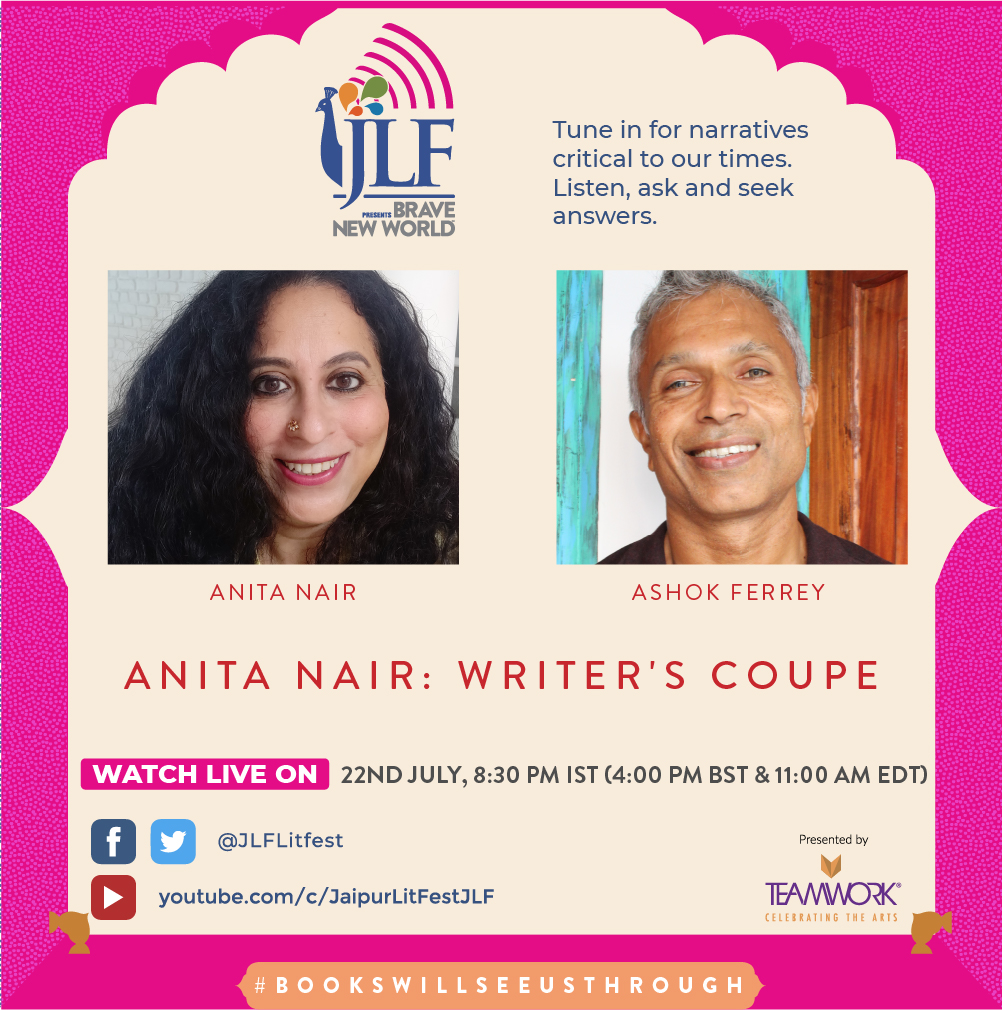 “I wanted to read someone who rose above the romanticism of most women writers. I wanted robust prose; I wanted muscle and sinew, even if it was a love story.”
― Anita Nair, Eating Wasps

This delightful session on JLF Brave New World had me ruminating about my own rollercoaster journey of trying to finish my first novel in this lockdown. It is so comforting, almost cathartic, to hear an accomplished author share thepainstaking experience of putting together a literary piece, the amount of energy that they invest into it daily and the struggles that go with it. Be it ‘Lessons in Forgetting’ or ‘Ladies , Anita Nair likes to spin characters who are fiercely independent, imperfect, relatable, and fully responsible of the consequences of the decisions they take. When speaking of the driving force behind her writing, Anita Nair said that from whenshe began to write her first work and until now, something she experiences till date,is that“writing takes the supreme position,”, renders her almost “useless for human company” and life tends to revolve completely around “the story and the storytelling”. If you have given a shot to writing, you would probably resonate with that feeling; one somewhat disconnects with the outer worldwhile connecting deeply with one’s inner one. Writing is not all that Anita Nair did back when she started though; she used to juggle between her job in advertising and writing. Engaging in these two professions at the same time enabled her to write without having the constant pressure “to become saleable”.

As a lot of her writing involves the struggles of women, of them living in the constant fear of being worthy of “societal acceptance” and the difficult choices they have to make, she reflects deeply on “how women perceived themselves and the world around them” before commencing her writing. She addresses the notion of society always requiring women to fit into a set of social norms through her book, ‘Eating Wasps’ When Nair spoke with such passion about the matter, I could not help but be reminded of the rebellious and free-spirited character of Jo March from Louisa May Alcott’s ‘Little Women’, who likewise, always is at odds with the rigid conventions put down for women of nineteenth-century America.

Ashok Ferrey remarked that Nair often seems to not only create her characters, “but inhabit them”- to which she agreed saying “I enjoy deconstructing the character, identifying with it, it is almost like method writing for me!” Nair acknowledged that despite the quantum of change that humanity has undergone in the past few decades, she often worries whether it is only working at the “superficial level”. One thing is for sure: that there remains a long path for us to traverse to achieve gender parity.For now, just like the rest of the world is trying to avoid catching cabin fever, she likes to fill her days “with a lot of work”. On describing her routine for her next (a crime-thriller),she said,being a morning person, she is up early everyday refining her craft(except Sundays of course), paying special attention to detail and research.

Even though her work confronts some of the darkest realities of our times, she never forgets to remind her readers that there always remain ways to leap, to soar.