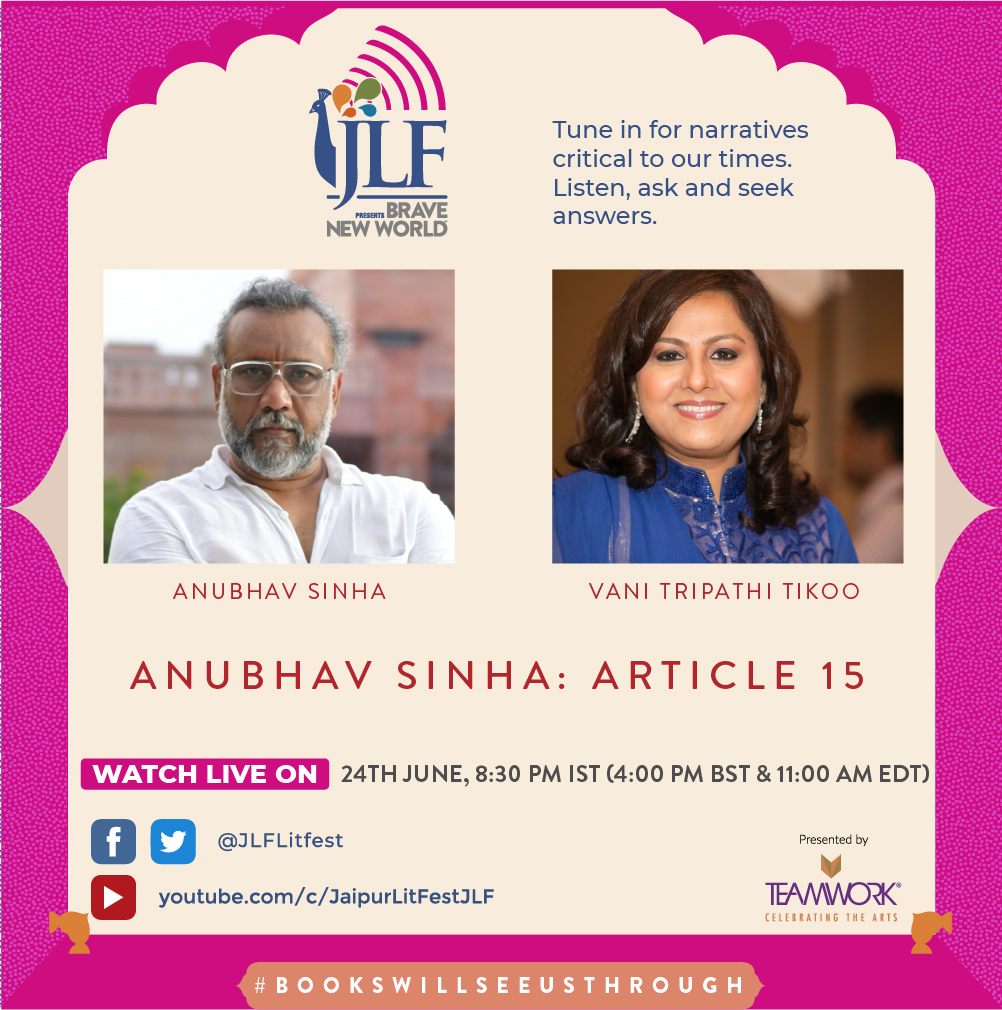 Turning Mirrors into Windows: A conversation with Anubhav Sinha

I remember watching Article 15 with my friend and being blown away by the sheer brilliance of the journey that Anubhav Sinha led us on with his storytelling. I also remember the gazillion questions and comments about the film’s tonality, texture and style that I wanted to uncover. So when I got to know that JLF Brave New World was bringing us a session with the man himself, I was super excited for the opportunity to listen to the master director decode his filmmaking process for us.

To be honest, I was expecting this to be a session that dissects the research, methodology and the process that went into making Article 15, but it turned out to be much more! The moderator, Vani Tripathi Tikoo brought to light Anubhav Sinha’s phenomenal journey, both as a filmmaker and as a human being. During the course of the conversation, I also realized that even though I am a huge fan of the director, I was unaware of the fact he had directed my favorite television series while growing up – Sea Hawks!

What stood out for me in this session was the absolute honesty with which Anubhav Sinha answered all questions. He was brutally honest and owned up to his errors and oversights. “I lost control of the film, it became bigger than me”, he commented when asked about Ra.One.

He spoke about the numerous times he was “written-off” or when his career was deemed as “finished”.  But he rose again, stronger and brighter than what he was before, akin to a phoenix, an image that kept popping up in my head every time he spoke about these instances in his career. At one point he said, “I am made of three parts – Benaras, Aligarh and my friends”. The influence of his lived experiences in these beautiful cities along with his gratitude and love for them was extremely heartwarming.

The evolution of Anubhav Sinha’s filmmaking from Tum Bin to Thappad is quite remarkable. To pull off masterpieces like Mulk, Article 15 and Thappad, one requires utmost conviction and in-depth knowledge of the subject matter. However, Sinha revealed that these stories came from his heart; he is deeply passionate about bringing to light the crucial issues that each of these films addressed and that he strongly believes in the message of the films. In this day and age where communalism, caste and patriarchy continue to plague our society, his courage, conviction and dedication to tell the stories that need to be told, will definitely inspire many young filmmakers.

During the conversation, Anubhav also mentioned that he made Thappad not just for women, but also for men. He spoke about how after the film released he received calls from many women, but what also made him happy were the calls that he received from many men, congratulating him for making the film. A filmmaker who sets such a benchmark to gauge the success and impact of his film, rather than the box office numbers, is definitely an inspiration to me.

I am a firm believer that art plays a crucial role in shaping our society, and directors like Anubhav Sinha give me a lot of hope and courage. I am grateful to Teamwork Arts and JLF Brave New World for bringing such riveting and inspiring conversations to the comfort of our homes. Looking forward to many more such conversations!