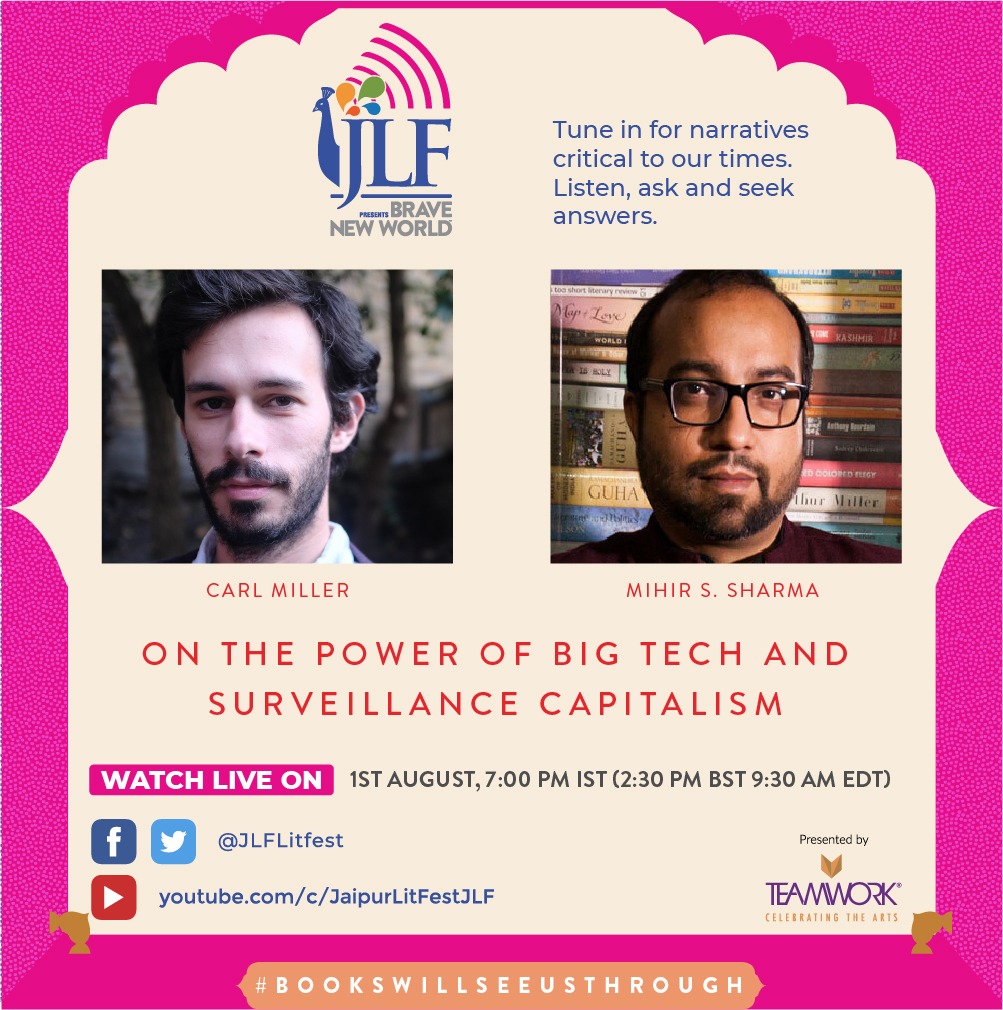 On the power of Big Tech and Surveillance Capitalism

Forced to conduct our social, personal and professional lives through a screen in the ongoing pandemic, we have become more wrapped up in technology than ever before in history. If we have slipped into a ‘new normal’, last weekend’s session at JLF Brave New World was a reminder to be mindful of our dependence on the internet.

In ‘Big Tech and Surveillance Capitalism’, author and founder of the Centre for the Analysis of Social Media, Carl Miller, and Senior Fellow at Observer Research Foundation, Mihir S. Sharma, discussed the power technology has come to wield in our world. In his book ‘The Death of the Gods’, Miller refers to a global power grab on the stage of information.

“Power can be slippery to talk about,” he told the audience, “sometimes it’s hard, coercive forms of power but it can also take other forms - financial inducements and economic incentives - and it goes all the way into the softer, more subtle reaches of persuasion and an attitudinal belief shaping.”

Mihir S. Sharma added that there was a sense that through the internet, countries could intervene in each other's politics, but it is also the internet that has been a vehicle of social change, like the Iranian Green Movement or the Ukranian protests at Maidan in Kiev which were all arranged around Twitter. “We thought that the internet was going to be a source for openness, democracy and greater transparency and it doesn’t seem to have worked that way, but are we being too pessimistic?” he asked Miller.

Carl Miller answered emphatically that if anything, we were not being “pessimistic enough” about the way power works today. To support his conviction, he quoted the example of how militaries around the world have been behaving differently since our entry into the age of information. Information as an instrument of war has been repeatedly demonstrated in literature and in war movies. One example that springs to mind is that of ‘The Imitation Game’, where the nerdy, asocial mathematician, Alan Turing, played by Benedict Cumberbatch, decrypts German intelligence messages for the British government during the Second World War, giving the British an informational advantage. But Miller warns that something else is happening now with militaries - “From around 2005, each of them is redefining warfare not as something that uses information but as information as a theatre of war, a space in which war happens within.” Bringing his viewers closer to the edges of their seats, he summed up this shift in a fascinating yet terrifying way - “Suddenly, everyone’s psychology has become strategy and attention has become territory.”

Individual and group attention have become a battlefield, not just for militaries but also tech behemoths, added Mihir S. Sharma. Carl Miller agreed with him and sought to throw light on the phenomenon of “attention hacking” that is at the heart of all tech enterprises in the world today. He talked about how psychology and tech design are married to maintain the user’s attention and even addiction to tech platforms. “When you scroll, it’s a bit like pulling a one arm bandage,” he said. It might seem benign on the surface, but the design deliberately uses cognitive and psychological theories and principles to make these platforms “as sticky as possible”.

To demonstrate the darker side of unregulated power, Miller reminded the viewers how this is achieved by algorithms, and leads to us relying on the personal or moral consciences of developers. “The scary endpoint of my discussion with an engineer was that the developer could not hold in his head a picture of how his algorithm actually works with its users,” said Miller, illustrating the trope of the ‘ivory tower engineer’.

The two members of the panel, however, attempted to temper some of the rage against the architects of technology and pointed out how we might also slip into “far too much lazy tech bashing”. Miller offered an elegant idea to nudge us towards a solution to the problem: “We need to rebuild the moral architecture that governs our lives. We don’t need a surge of developers, we need philosophers, librarians and digital literacy people, basically anyone who can cause a ceasefire to happen within the theatre of information.” Technology is here to stay, he asserted, with its inestimable, unbelievable benefits to our lives but we must work to make it humane. As in any other kind of power, we must not allow it to exist in raw, unfettered ways, but “we should instead civilise it, humanise it - we will get there.”