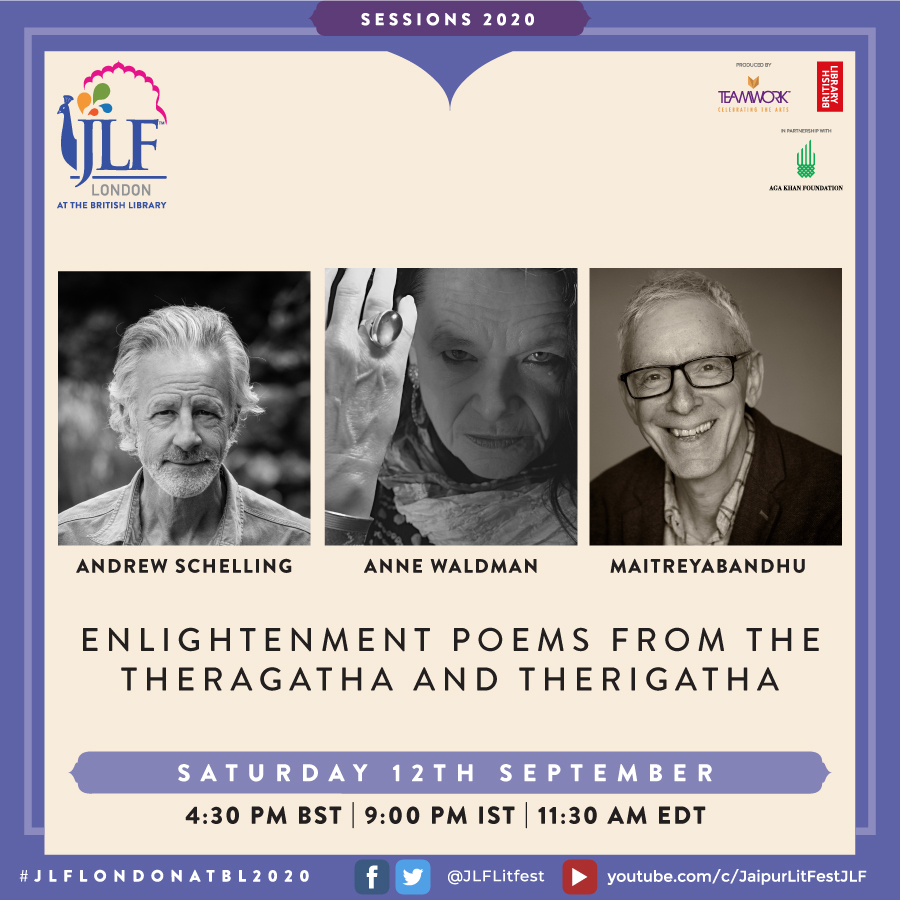 Enlightenment Poem from the Theragatha and Therigatha

One of the things that strikes the reader first when going through the Therigatha and the Theragatha - verses of the elder nuns and elder monks - is the realisation that although these are some of the oldest Buddhist texts, the underlying themes of suffering seem remarkably extant. Depression, loneliness, loss of children and the vulnerability of old age- all feature as causes of suffering, which are then sublimated into poetry, guided by the Buddha’s philosophy.

Last weekend at the digital edition of the JLF London at British Library saw poets and translators, Andrew Schelling and Anne Waldman, in conversation with an author and teacher of Buddhism, Maitreyabandhu, discussing the songs of the first Buddhist nuns and monks. “Is it a book of poems or religious text? Does it belong to the spiritualism or poetry section, or perhaps self-improvement?” Maitreyabandhu, whose name roughly connotes ‘friend’, commenced the session with the question of classifying the texts.

“I think both,” replied Anne Waldman. She admitted to being taken by these poems recited by the first-ever women ordained in the Buddhist monastic tradition. Waldman reminded the audience that the songs were written over 2000 years ago, at a time when literacy was a rare privilege. The authors of these verses were most likely engaged in an oral tradition and this is reflected in how often the verses in the Therigatha and the Theragatha have changed their form. “These are wandering women, not nuns in cloisters. They are going through all sorts of hardship - exchanges with their mothers-in-law, loss of children, illness. Some of them have been prostitutes, some have been homeless,” explained Waldman.

Verses in the Therigatha seem to be steeped in suffering - “The arrow is out. I have put my burden down. What has to be done has been done.” But at a closer look, one finds a sense of joy and redemption in them as well. “One of the things we have tried to do,” said Schelling, “is to reinstate both poetry but also to some extent, a sense of delight and fun about these old songs. They have been buried for so long under piety, shrouded under trappings that the West associates with its religious traditions.”

For most of India’s long poetic tradition, this would perhaps never be a question - in the Indian subcontinent, religious texts, poetry, philosophy, music and rhetoric are known to intertwine with each other to form treatises and collections of instructive texts. “These things didn’t have to be separated,” he added, “it seems to me very much a kind of western dualism to want a divided sense of aesthetics, fun, and joy front the seriousness of religious quest.”

This accessibility that the text provides is easily able to carve out space for those who wish to understand the core messages that lie beyond these words, curtains don’t cover the message through means of excessively fancy language. This access to these texts is one of the reasons why they had such an impact on Schelling. For Schelling, it was poetry that brought him to Buddhism since, from a very early age, he read ancient Asian poems infused with the spirit of the Buddha.

For the poet, the appeal in these poems was that they were not dressed up fancily. “We moderns don’t like our poems dressed up too much!” claimed Schelling. He wanted something direct, the emotion floating on the surface instead of it being buried under heavy ornamentation and that is what this poetry provided him with.

Following this, the conversation proceeded to discuss the essence of impermanence prevalent in Buddhist texts and ideas. “Almost all the ballad-like songs tell the tale of the person’s life...the man or woman who left their former lifestyles to join this wandering order of seekers,” said Schelling and claimed that this often occurred since these people were hit with impermanence.

Their lives had been marked by tragedy and whatever it was which they counted on did not exist anymore and that moment of realisation of the nature of impermanence was often accompanied by a new name being granted to this person - as if to say that even that their previous identity was based on a delusion and now, they are to move forward with a persona, freed from the earlier one, which was more suited to the way the universe really is.

To add more nuance to Schelling’s insights, Waldman began to recite a poem written by the mother of Sumangala, who was the wife of a weaver of straw hats:

No longer a slave among dirty cooking pots

And I’m through with my brutal husband

And his tiresome sunshades

I purge lust with a sizzling sound - pop

O happiness, meditate upon this

Maitreyabandhu added to the conversation by claiming that more often than not, Buddhism tends to get “soft press” but when one takes time to go through some of these poems, they are met with a strong sense of an uncompromising breakthrough - an absolute commitment to the most uncompromising truth of things.

The session concluded with Schelling reading a beautiful passage:

“Gautama, how many lifetimes I spent wandering hell realms

Then was I born where ghosts raged with insatiable thirst

I took animal shape, how many times!

Stumbled in darkness, went placed where nonsense mixed with reality

These lives never had substance, they wobbled and drifted

When I realised they were just my own mind

A wonderful place to switch off an equally intriguing conversation...tranquility!