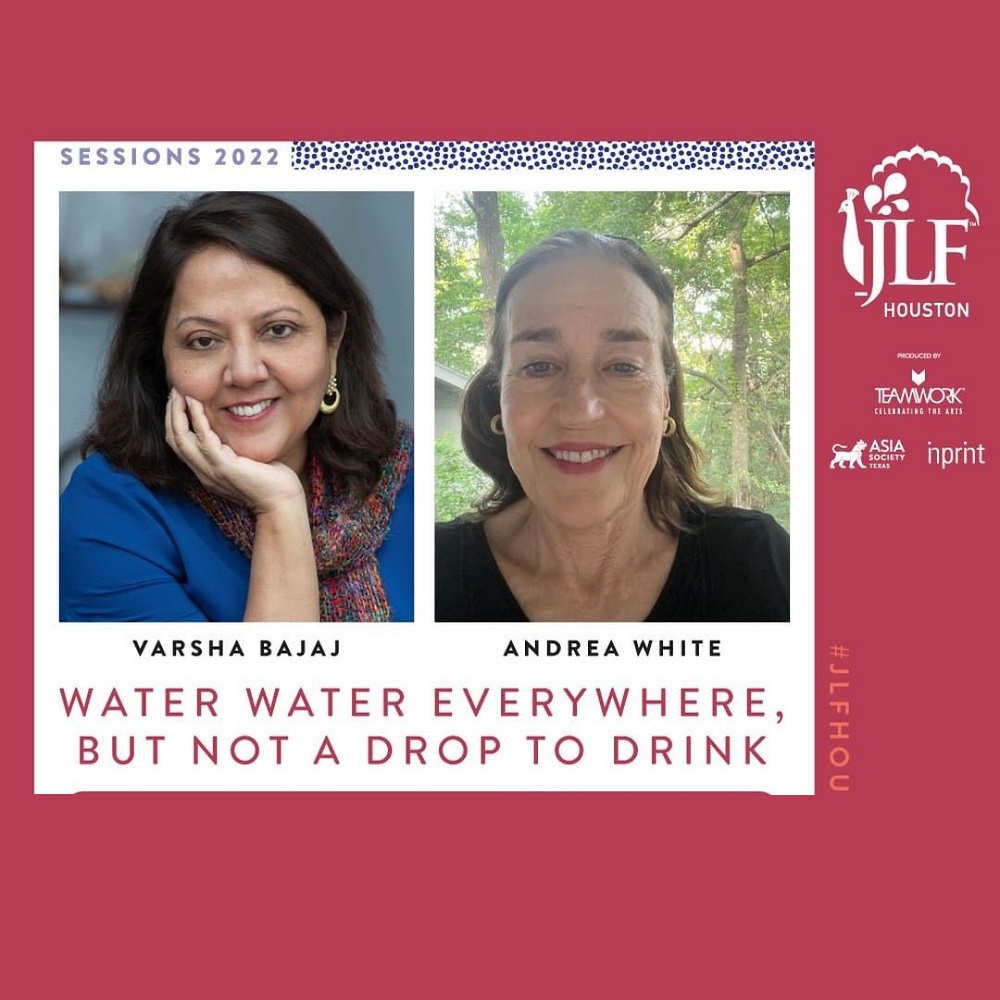 Water Water Everywhere, But Not a Drop to Drink

At JLF Houston 2022, bestselling author Varsha Bajaj discussed her compelling middle-grade novel, ‘Thirst’. Bajaj's book is a poignant take on class, wealth, and equity around the disparity of water in the suburbs of Mumbai, India. During this session, Bajaj was in conversation with writer and civic leader, Andrea White.

Bajaj worked as a therapist at an intervention clinic in a poor neighborhood of Mumbai, and after she realized that theoretical knowledge and evaluation tests would not serve her well, she “decided to share roti and sabzi with the clients in the clinic, and to hear their stories”. This, Bajaj said, “helped me to bond, it helped me to understand… I have wanted to write about them…”. In 2020, when we were hit by the coronavirus pandemic and shut down inside our homes, she decided to seize the opportunity to write about the plight of those facing water scarcity in the slums of Mumbai.

More than seven hundred million people on our planet do not have the access to clean drinking water and Bajaj’s New York Times bestselling work narrates the tale of water scarcity faced by millions through the eyes of a ‘spunky’ protagonist, Minnie, a twelve-year-old, who believes that everybody should have access to water. The story shows how Minnie overcomes her doubts and insecurities and evolves into a confident woman. Bajaj saw the stories of many Indian women in Minnie and she noted that despite all odds, women emerge strong, and are determined, “so determined that history would be different…for their daughters”.

The title of the book, Thirst,  “refers not just to thirst for water but thirst for opportunity, thirst for education, thirst for a chance”.  In addition to the plight of the people facing water scarcity, the book is packed with a “beautiful story about Minnie finding her voice and having an impact on her community…” In that sense, it is also a coming-of-age novel, interspersed with poetry!

As a writer of novels oriented towards middle-grade students, Bajaj believes that kids are “probably the most discerning audience…they don’t give you a second chance…they roll their eyes and put the book away”. She shared her techniques, and the process of character formation - she keeps on working on her draft till the characters start to feel like her own kids.

Bajaj also expressed a heartfelt thanks as “to librarians and teachers”, she added that “our world is getting complicated…and there are endless distractions for young people and it’s becoming increasingly difficult to…bring them to the written page…to me they are the heroes…” As the session wrapped up, Bajaj shared some words of wisdom for budding writers: “If you want to write, read, read, read! But also be brave, because writing is both an act of faith and of bravery…”