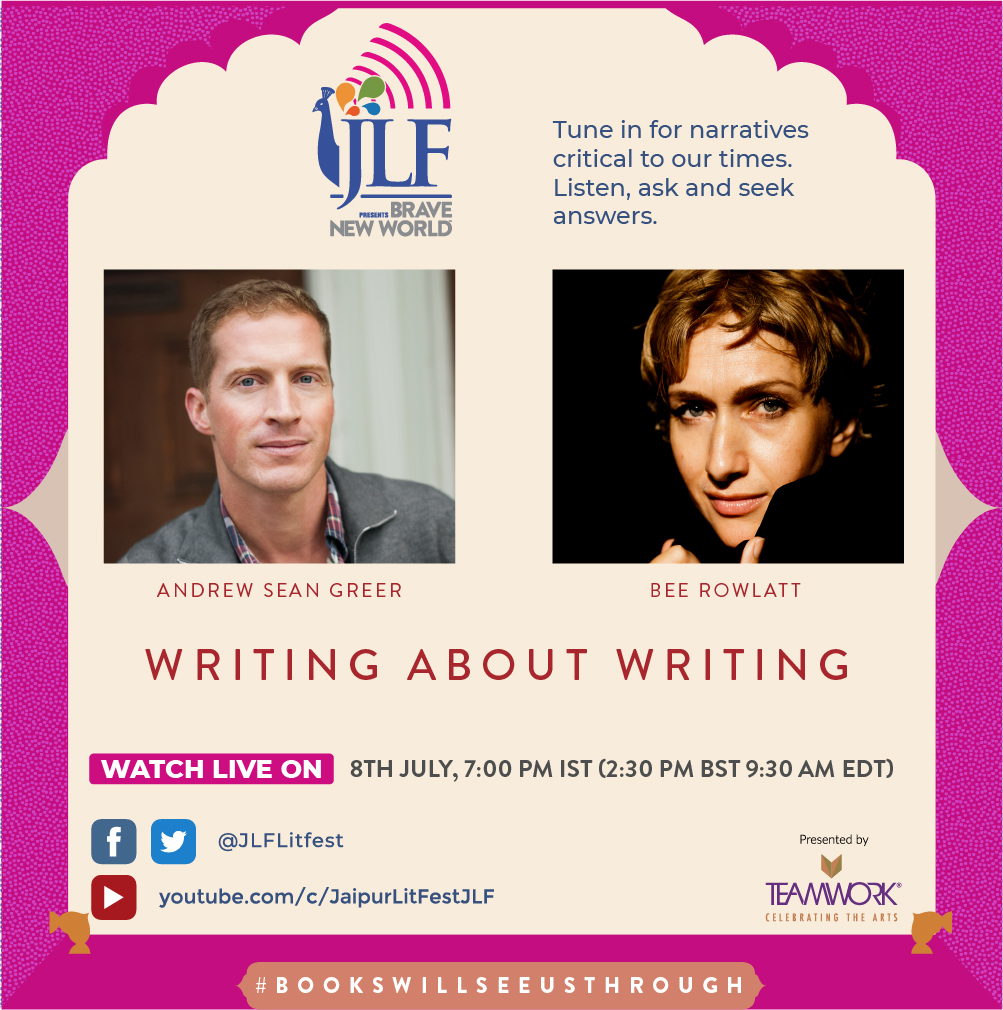 “After all, what use is a novelist in a crisis? All we can do is take notes.”

The ebullient Bee Rowlatt quotes from an article written during the current lockdown by Andrew Sean Greer and then adds, “But I would like to challenge you on that. After all,taking notesis a really big deal.”

Mr Greer, up at 6.30 amSan Francisco time, grabs his mug of beverage, looks at his own glowing image on the screen and declares, “I’m radiant. Why amI radiant? The moisturiser is still soaking in.” Carrying on, he says, as a writer he feels the need to challenge communities and yet be empathetic. Beyond taking notes, there is a responsibility. “We have to represent different groups thoughtfully and carefully.”

Greer is talking of his Pulitzer-winning novel, ‘Less’, that follows Arthur Less, a gay writer, on an escapist caper around the world where he stumbles his way through a panoply of emotions to find happiness in the end. Andrew Less is Greer’s alter ego in the novel, wrestling with a failed romance, being told that he is a bad gay because his books depict homosexual characters with sad lives. “I cannot forget where I came from. And I need to inspire my people,” says Greer. Which is why, Less is not a sombre, claustrophobic gay novel. Greer believes strongly that soon, the division between a gay world and a straight world will cease to exist. New novels need to tell stories that intertwine lives and have queerness that’s very open.

“I’m not good at political arguments. I’m not very persuasive and get caught up and angry. So instead I thought I’m going to write about gay characters that feel like real people.” Mr Greer admits that he feels the pressure to represent, from within himself and the fact that his “gay comedy” went on to be a prize-winner makes him very happy. It surprised him, he says, when he met a steady stream of young women who were fans of the book, in Jaipur, who read Less as a romantic story, a story of empowerment and gender liberation. “I wasn’t expecting that!”

Discussing his craft and strategy while writing, Mr Greer lets be known some unusual tendencies. “I write like I am solving a crossword puzzle, answering the questions that I know and carrying on back and forth till they all connect. And I end my writing day on an upward curve, in the middle of a chapter when its going well. Stop while the iron is hot. That way, when I start writing the next day, I am starting on a high, instead of a blank page.”

Bee Rowlatt breathes in sharply, “That’s controversial! I’d be afraid to lose the momentum!” Andrew looks abashedly and adds a rider, “You don’t have to take that advice. I feel the same way.”And yet again, reflecting the vulnerability of Arthur Less, he admits that his first drafts are terrible and most of the time his editors cannot tell whether he is writing a fantasy or a comic. “I go back and spend a lot of time fixing things because apparently (from my editors’ questions) I haven’t done a good job.”

The conversation between these two writers sitting on two sides of an ocean dividing continentswas joyful and full of hope.What matters in these current times is that we find joy in the little things, the “shreds of joy” when the world is falling to bits. Greer remarks that even without a crippling pandemic, we are all fighting to survive despite everything – “humiliation, disappointments, heartaches, mistakes, bad decisions, the facepalms of life” to make it to every sunset every day. And some of these sunsets have a table with a glass of wine and a bowl of olives and some have none of that. But as Ms.Rowlatt says in her infectious, delightful way – hold onto that small piece of joy; we need to defend every precious moment of happiness that comes our way. And sometimes being “happy enough” is better than trying to meet our own expectations of happiness in a society knee-deep in consumerist ambitions.

Joseph Heller, the author of ‘Catch 22’, once told Kurt Vonnegut how he had something the wealthiest person could not have. What on Earth could that be? Joseph’s reply was, “The knowledge that I have got enough.”

So yes, we don’t have to have perfection; all we need is an occasional sunset with a glass of wine. That could well be enough to make us fulfilled. Because as Andrew Sean Greer writes in ‘Less’, happiness is not bullshit.