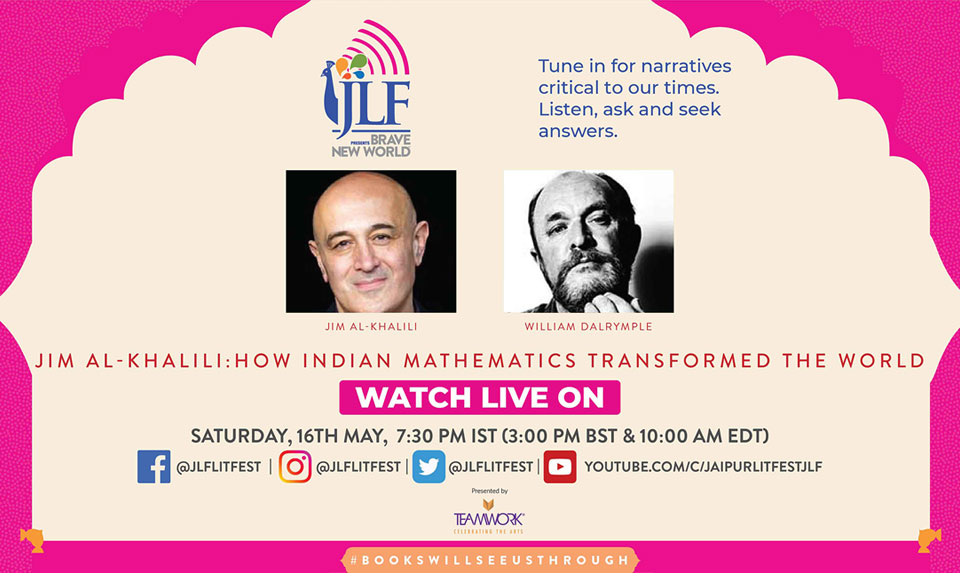 My first encounter with the history of Indian mathematics was in Kashmir in 2017. I was at the Shri Pratap Singh Museum, which was under renovation at the time, and after much pleading with the head of the archaeological department, I was allowed a few minutes inside the building under the watchful eye of a janitor. I walked into one of the many rooms in what used to be the palace of the Maharaja, where I saw, through a smudged glass display, some of the oldest Kashmiri manuscripts laid out inside a box. One of them contained literature on numerals in the native script of Kashmir- the Sharada script, named after the Hindu goddess of music and eloquent speech, who is depicted seated on a swan, holding a pen, a rosary, a pot of nectar and a veena in each of her four hands. Upon close inspection, I noticed the similarity between the Sharada numerals and those of Arabic. Moving forward three years, at last weekend’s session on JLF Brave New World, ‘How Indian Mathematics Transformed the World’, theoretical physicist, author and broadcaster Jim Al-Khalili summed up articulately the reasons behind such a fascinating connection between Sharada and Arabic numerals.

“What we call Arabic numerals in the West should actually be called Indian numerals, as the Islamic polymaths had themselves acknowledged,” said Jim. It was during the 8th century occupation of Sindh, which is not far from Kashmir, that the Arabs had become acquainted with a scientific system of astronomy and mathematics for the first time, as part of the empire building project. Jim spoke about the early Islamic empire as the grand unifier of the classical knowledge of the world. “All these great texts were from different parts of the world - Greece, Persia, India - were gathered and translated by Muslim polymaths. One of the most important Indian contributions to mathematics - the decimal system - was adopted in the West only a few centuries ago, but here it goes back 2000 years.”

While Europe lay in the dark ages, reminded Jim Al-Khalili, Indians were using a system which gave birth to the numeric symbols that we see on our computers today. Who were these great minds that developed mathematics in India? “The system of placeholders probably goes back to the Indian mathematician Aryabhata from the 5th Century AD, at a time which marked the beginning of the dark ages in Europe. But the greatest influence on mathematics as we know it today came from Brahmagupta (700 AD),” Jim added. Brahmagupta’s seminal text, ‘Siddhanta’ or ‘Sindh Hind’ in Arabic, was translated into Persian, Arabic and then Latin. His treatise wasn’t the only one in use; however, works of Greek mathematicians like Euclid and Pythagoras had already been acquired by the Islamic empire and were under the scrutiny of Arab scholars. Moreover, when ‘Siddhanta’ was first translated, it was found to be rather obscure, as the doctrine was written entirely in verse- explained by the fact that pre-Islamic Indians rendered everything in poetry, as knowledge was largely passed down orally and poetic devices aided memorisation. “But despite the obscurity, it became a key text to understanding mathematics,” Jim concluded.

William Dalrymple, the moderator of the session, asked Jim al Khalili about the significance of astronomy in India, which was often used to “enhance and legitimise kingship”. Jim explained that when the science of mathematics erupted in the Islamic world, it was in the service of religion. “It had practical reasons,” he said, “like wanting to know the phases of the moon, time for fasting and prayers and the cycle of Ramadan. Astronomers would live in mosques and use their sundials there.” In India, however, astronomy was seen as a sign of prestige and kings lavished patronage on astronomers, a phenomenon that is rare elsewhere in the world. Astronomers were keen on coming up with astrological charts for the king, he said, to hit upon the hour to go to war or figure out the star signs for winter crops. “Astronomy and astrology went hand in hand in India, whereby astrology was embedded in the culture and supported the advances in astronomy,” he said, explaining the two domains which shared their origin. One was a science and the other catered to a belief system, much like chemistry and alchemy.

Jim Al-Khalili brought the conversation to yet another towering achievement of Indian mathematics. It is common to attribute the discovery of zero to the Indian civilisation, but there are nuances in the story of zero that he explained succinctly in the session. Zero as a symbol goes all the way back to the Babylonians, he explained, and the notion of zero as nothingness or a void was something that the Greeks were quite familiar with. The path-breaking contribution of Indian mathematicians, however, was to use zero in mathematical operations- for example, dividing by zero would amount to infinity or that multiplying by zero would give zero. It was here in ancient India that zero was assigned a place between negative one and positive one, thereby defining the numeral zero.

Concluding the session, Jim Al-Khalili expressed his gratitude to “the gift of Indian mathematics”. “We may have eventually developed mathematics in the modern world,” he said, “but the decimal system that we take for granted was developed by Indians and without the advances made by stellar Indian mathematicians like Aryabhata, Brahmagupta and Ramanujan, we would have been set back a few hundred years.”