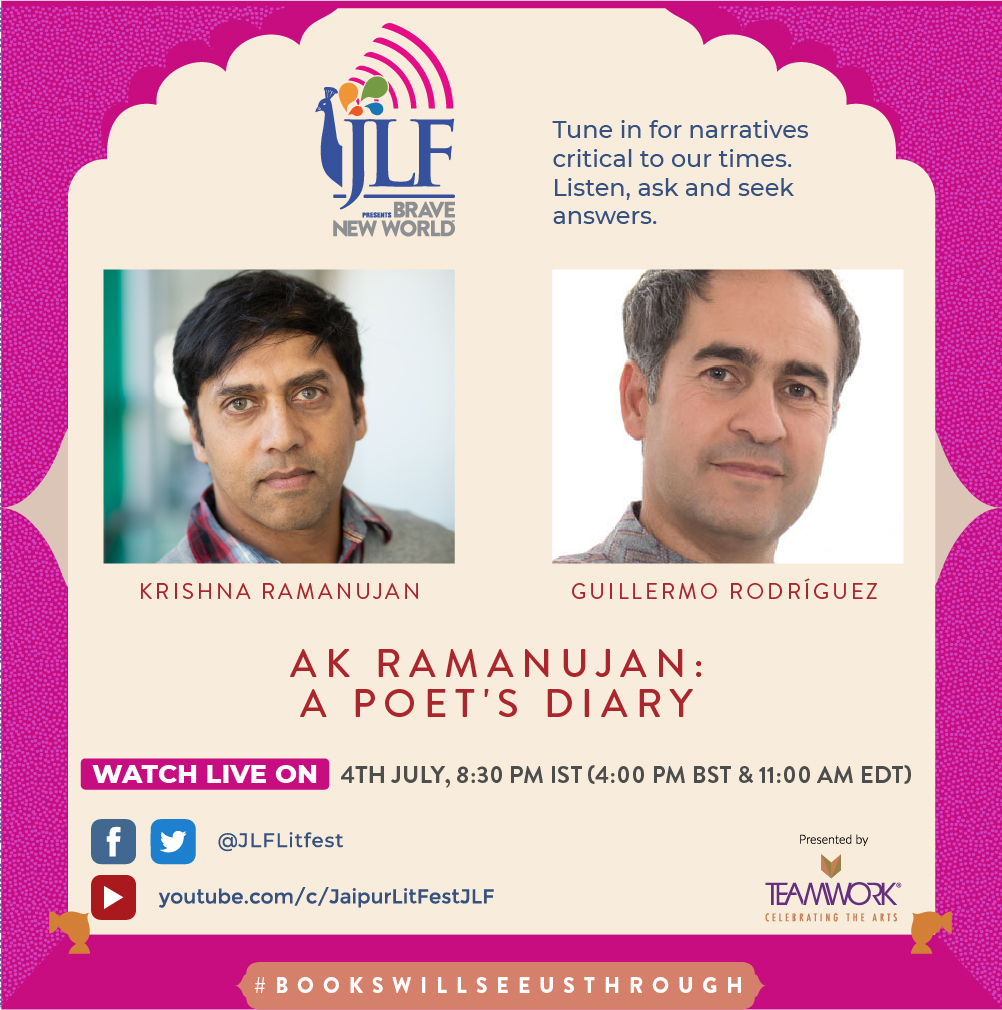 As 2017 neared its end, Guillermo Rodriguez found something beautiful; a journal entry of the iconic scholar A.K. Ramanujan, which documented his travel from India to the United States of America. Having been enamoured by this interesting piece, Rodriguez made it a point to establish contact with the scholar’s son, Krishna Ramanujan. Equally fascinated with the work, both Rodriguez and Ramanujan made the decision of giving the world access to these personal diaries and journals of A.K. Ramanujan, providing a window into his creative process and allowing people to know more about the scholar in his very own voice. The viewers of JLF Brave New World got an exciting opportunity to hear extracts from the book which the duo have edited, ‘Journeys’; an immigration story of a man who dreamt of leaving his small town and moving out, in to the world.

“The entire book is in his own words…it’s less a personal book as it is a book about his views on creativity, travelogues, poetry drafts…we had a very clear vision for the book…you see the complete arc of his life created through his own voice and through his own creative work” said Ramanujan as he mentioned how the journey of editing the book was very personal for him since the journal-entries reconnected him with his father, an experience which was very healing for him.

For me as well, the session felt very close to my heart. Having grown up listening to the works of A.K. Ramanujan, the very experience of getting to hear his personal diary entries, in a way offered a ‘behind-the-scenes’ picture of the scholar’s professional life. All I ever knew of A.K. Ramanujan was through his stories, essays and poems, but listening to his diary-entries allowed me to understand how his creative juices flowed and the sort of ideas that came to his mind which resulted in his wonderful works. Since these journals documented a number of personal and vulnerable moments of A.K. Ramanujan’s life, listening to them also gave me the lens to view him more as a human and less as a scholar separated from us.

As the session proceeded, Rodriguez and Ramanujan highlighted some important turning-points of the scholar’s life; him becoming a professor of English and writing the evergreen poem ‘A River’ in 1951; the period between 1952 and 1957 when he involved himself in field-work and began studying folktales, listening to grandmother stories and oral traditions; and finally 1959, when he met the global word and the bridge of his life turned towards the West.

As A.K. Ramanujan boarded the ship to depart from India and to discover the flavours of something new, he wrote a reflexive note on the trip from Bombay to the United States of America. “We found the pieces that he left behind, the unfinished work,” said Rodriguez as he read out the notes of the scholar, which talkabout how he felt alienated and isolated. “He was bridge-building between cultures and he described himself as the ‘hyphen’ in ‘Indo-American’…the hyphen is also a metaphor of the journey…this was kind of a turning point in the narrative of him moving from India to America…the hyphen is not only external but also within himself, he is always feeling in-between,’’ Krishna Ramanujan commented.

However, this isolation that A.K. Ramanujan felt was not new to him; he had felt this while he was in India too. In his diary, A.K. Ramanujan explains how isolated an Indian intellectual was in his time; with 16.6% who could read it all and an overlapping 20% who were in cities like him; with only 2% English-knowing people and still fewer who held rationalist views; with every prudent man having a caste, and with him not being modern enough to be entirely abreast of Western ideas, because books did not reach India in time. All these elements fused together to further alienate the genius that was A.K Ramanujan.

The process of journaling for him thus, was extremely therapeutic and gave him an opportunity to play with the idea of public and private. ‘’For him, it was very much about ‘akam’ and ‘puram’…how the public may become private and the private may become public”, quipped Rodriguez. In 1976 he claimed that he was writing a journal for some time and these were thoughts which he penned down in private but finally decided to publish them and make them public “so that the private may find a place in a larger discussion just as the larger discussions entered my private journal.”

Staying true to his principle of betraying oneself at each turn of one’s writing, A.K. Ramanujan’s entries reflect a great sense of honesty and give the readers an opportunity to access his personal thoughts. Through these diary entries, we as spectatorsare able to sense it all; the happiness present in the obsession he had with his craft; the excitement, which flourished during his turning points; and even the grief he felt in his moments of vulnerability. In one of my very favourite essays written by A.K. Ramanujan, he talks about the ability that certain stories possess where the listener cannot bear to be a bystander but is compelled to enter the world of the story – this enthralling session felt exactly like that. As Rodriguez and Ramanujan took us on a journey of A.K. Ramanujan’s life, I too felt ecstatic to get a peek into his world.