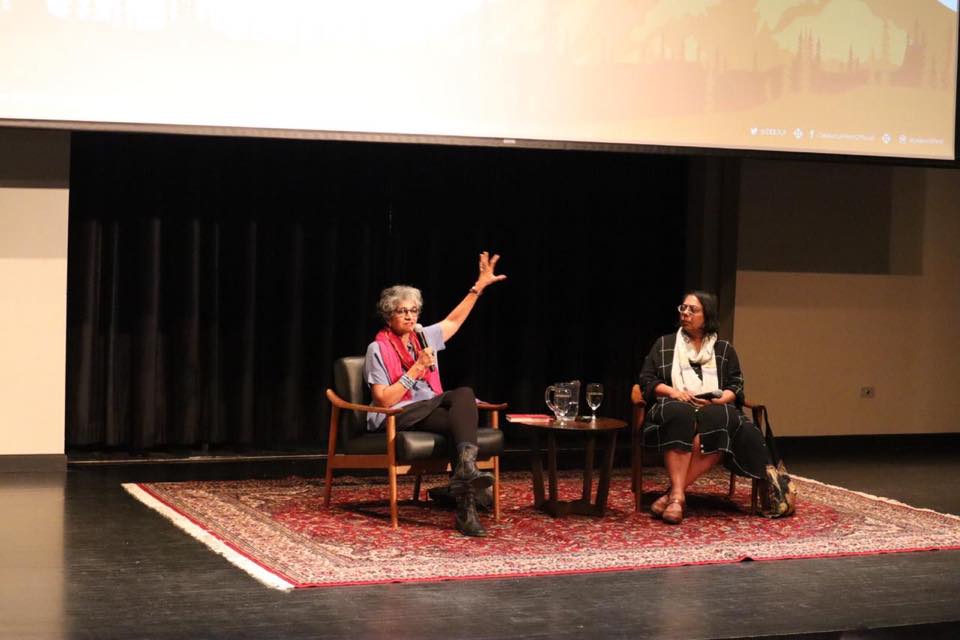 The second day of sessions at JLF Colorado 2019 saw two authors discuss the issues and silences around the subject of rape.In the session‘What We Talk About When We Talk About Rape’,author Sohaila Abdulaliandfeminist campaigner Ruchira Guptaspoke of their own experiences and journeys, how violence against women continues despite growing awareness, human trafficking, and how things are changing for the better but also for the worse.

ModeratorRuchiraGupta’sactivism started when, as a journalist, she encountered sex trafficking, where girls as young as 7 where being sold for $100-$150. This led her to create a documentary of her experiences, The Selling of Innocence, which won an Emmy. She then left journalism to start the anti-sex trafficking organization, ApneAap Women Worldwide, which now has 20,000 members and has helped educate over 1000 girls, giving them the support they need to lead different lives.

When SohailaAbdulali was 17, and on a trip back to India during her summer break, she and a friend were abducted by armed men and gang raped. Freed after promising never to tell anyone, she returned to college in the U.S. In her senior year, she received a grant to research rape in India but found hardly anyone willing talk to her about thetopic. She ended up writing an article published in a feminist magazine whereshe shared her story.

30 years later, things had changed.The Delhi gang rape of Jyoti Singh was the watershed moment in the conversation about women’s safety in India. Mass protests on the streets of Indiancities forced authorities and the police to finally wake up and be held accountable. There was still littleliterature about rape in India at the time, and in the ensuing media storm, Abdulali’sprior article was recirculated and soon went viralon social media. “All hell broke loose”, the author noted. Reporters, journalists and others sought her out to hear from the woman who had written this brave article all those years ago.

In the session at Canyon Theater at the Boulder Public Library, Abdulali made the point that while “rape is a ghastly experience, it is one of many traumas that can happen in life”. When Abdulali was gang raped as a teenager in India, she did not allow it to define her. She moved on from the experience.

Later, Abdulaliwrote an op-ed column in the New York Times, in which she sharedher own experiences and her opinions on several issues surrounding violence against women. Thecolumn generated 1000 emailresponses and she received an overwhelming amount of support and praise.

The conversation surrounding rape and other forms of violence against women is growing louder around the world. This has brought about a positive impact but also a negative impact, according to Ruchira Gupta. She pointed out that while groups were able to pass legislation against sex trafficking and rape, there was also a backlash against this vocal women’s movement. Women continue to be raped across the world, even after changes in the law and the perception about why rapes take place. If perpetrators were politicallyconnected, threats to victims and their families became the norm. Gupta believes that the rape culture has, despite growing awarenessand mass activism, continuedto thrive with impunity. Laws are still not always enforced properly,especially when those in power are the ones who perpetrate the violence.

“You cannot predict how each person will recover or be impacted,”Abdulali said. “You cannot protect those you love from harm,” she noted. In the U.S., sexual violence is equally rampant, with 1 in 3 people being victims of sexual assault. Rape is a crime in which we all pay the price, the panelists agreed. Despite positive strides in the fight against violence against women, much remains to be done.