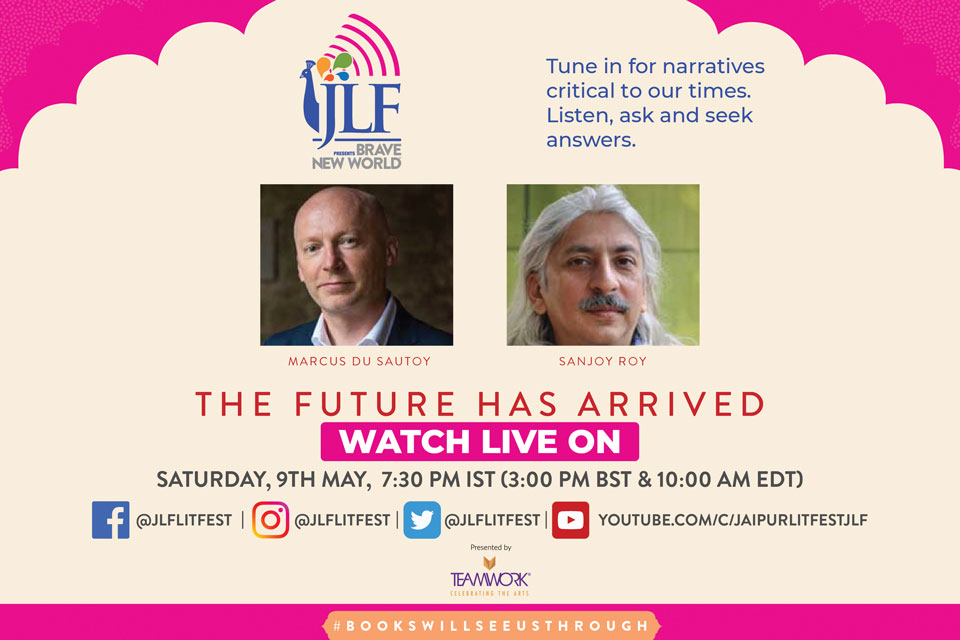 The Future has Arrived!

Has the coronavirus accelerated the fusion between the “real” world and the cyber world?

Marcus du Sautoy, in a riveting conversation on JLF Brave New World, with Sanjoy K. Roy on mathematical models of computation, data collection vs. privacy, robotics in era of impending unemployment and the limitations of the virtual world, provokes more questions as we struggle to come to terms with a new “normal”.

“The Mathematics of Epidemics and Pandemics has been around for years and doesn’t really require very sophisticated computing! What’s so depressing to me is that it really just depends on being able to gather data to feed into those equations.” Marcus expresses disappointment at the lack of foresight and preparedness of the UK government. According to him, they had run these computing models in the UK the last couple of years, and made the government aware of the potential disaster luring around the corner. Tragically Brexit consumed all their energy, catching them unprepared when the pandemic hit.

A mathematical computation for the future of this virus is possible. According to Marcus, how the virus spreads, grows, and how it dies, comprise a very mathematical topic. We do not know what is happening at the moment because we are not gathering enough data. As the WHO has recommended, we need Tests! Tests!! Tests!!! The countries that have gathered this data are able to feed the information into these equations and get a clear assessment of what the reproduction numbers are, and the pattern of infection. They have thus managed to flatten the curve. Epidemiologists across the world are crunching these numbers and the more data we can get, the better we can manage our way through, is the point Marcus firmly makes.

Approximately 3.5 million cases of coronavirus have been reported at the moment, pointing to substantial data already being gathered over these past months. Moving towards the search for an effective vaccine, Sanjoy questions the efficacy of Artificial Intelligence in finding a suitable cure: “If you were to backload the DNA of the human being and the DNA of the vaccine and the DNA of possible medicines already in the market, is there no way that AI can help, make the match in the way they are doing for cancer research today?”

Marcus affirms that though AI has been used to search through existing drugs and create a new drug which can very powerful for a new condition, it is very hard to take a theoretical model and think it will translate into something that will work immediately with such a complex system as the human body. Even through a mathematical computation, it is impossible to fast-track how a particular drug will work on the human body.

In his latest book, ‘The Art of the Short Cut’, Marcus reaffirms his belief that mathematics is a very powerful tool to understand a system and probably our best way for looking into the future. However, he cautions, there are some things you cannot fast-track, like the human body. Using the example of a musician, he says that just as a cellist needs to put in the requisite hours to tune their body to the music, a vaccine too needs time to see the positive and potentially negative effects on human metabolic systems.

“Even though AI is an incredibly powerful tool, it will have to be married with the interaction with the human body and that just takes time!”

The conversation veers towards the economic impact of the coronavirus and the caveat of social distancing forcing people to work from home, something many companies have been suspicious of in the past, wondering if their employees can be as productive at home. This has been a positive outcome as we have now realised that there is no need for a centralised office space to be productive, opening up opportunities to many who need flexible working lives.

They move on to the application of robotics and AI as replacements to the human worker, even as the need for jobs loom large amidst predictions of a Great Depression around the corner! Marcus admits that with the norms of social distancing in place, the impact on employment will be extraordinary, as he sees the power of robotics and algorithms taking over a lot of jobs previously being done by humans. Summing it succinctly, he says, “This period will see a lot of industries actually experimenting with tech out there, to combine human and robotics and that will have both positive and negative effects.”

Citing his own experience as a professor at the University, he has always wondered whether online courses are a threat to the university model of bringing everyone together in a common space, to share intellectual ideas. Now, with teaching and examining happening online, it’s almost like we have been compelled to see whether a decentralised learning space can be as effective?

It is extraordinary how this moment has forced people into the future quicker than we thought.

In the bargain though, we are losing something special, that personal contact, the physicality of touch, smell, taste. Recalling his vibrant memories of the Jaipur Literature Festival this January, Marcus said that consciousness, the feeling of presence is not just about the visual or aural, and that though he is enjoying this conversation with Sanjoy through a tech platform, he misses the immediacy of not being on stage with him, and connecting with the audience in Diggi Palace! This lack of human contact is the limitation of the virtual world, and cannot quite replace the experience of learning together in a university, sharing ideas at a literary festival, and walking through jostling crowds at JLF!

With Digital 3.0 coming in with the pandemic, are we seeing human beings getting more and more isolated? Will this continuing distancing lead to a more robotic existence for both humans & robots? Marcus is quick to acknowledge that an acute problem of this isolation, of living in a virtual bubble, is that there are no repercussions, which is why we see such hatred and toxicity on social media. “I behave so badly in a car that I would never do if I was actually in front of somebody.”

How is all of this impacting privacy and our rights? The collection of data through accelerated testing brings Marcus and Sanjoy into the grey zone of an individual’s rights to privacy. Across the world one can see some dangerous political manoeuvring as governments use scientists as human shields to be intrusive.

As a mathematician and humanist, Marcus admits to struggling with issues of intrusion of privacy, as one observes governments smuggling in almost fascist ways of managing a society. While the game changer for managing the virus is the data collection necessary for tracing cases, one is aware of the potential abuse that could happen. He ruminates, “This balance is going to be a tricky one to work our way through!”

Sanjoy shifts track a bit asking Marcus about his grandfather Peter du Sautoy, Chairman of Faber and Faber, and whether he was dismayed when Marcus broke with tradition and decided to be a mathematician. Marcus however has been publishing numerous books and articles and shares that his play “I is a Strange Loop”, was to have been launched by Faber this month and performed too. He is sad it has been put on hold because of the lockdown, but is honoured to be part of Faber’s extraordinary list of playwrights and plays, alongside the likes of Stoppard and Beckett, and wishes his grandfather were alive to see this.

At the moment Marcus is enjoying this period of no distractions, concentrating on delivering his book to the publisher before his deadline!

We look forward to ‘The Art of the Short Cut’, a celebration of maths that looks for clever ways to navigate complex problems and find that cunning tunnel around the mountain to find solutions.

As Marcus delightfully sums it up in the end, “Maths is really just story telling. My characters are numbers and geometry. I am a novelist but a novelist in a very different language!”