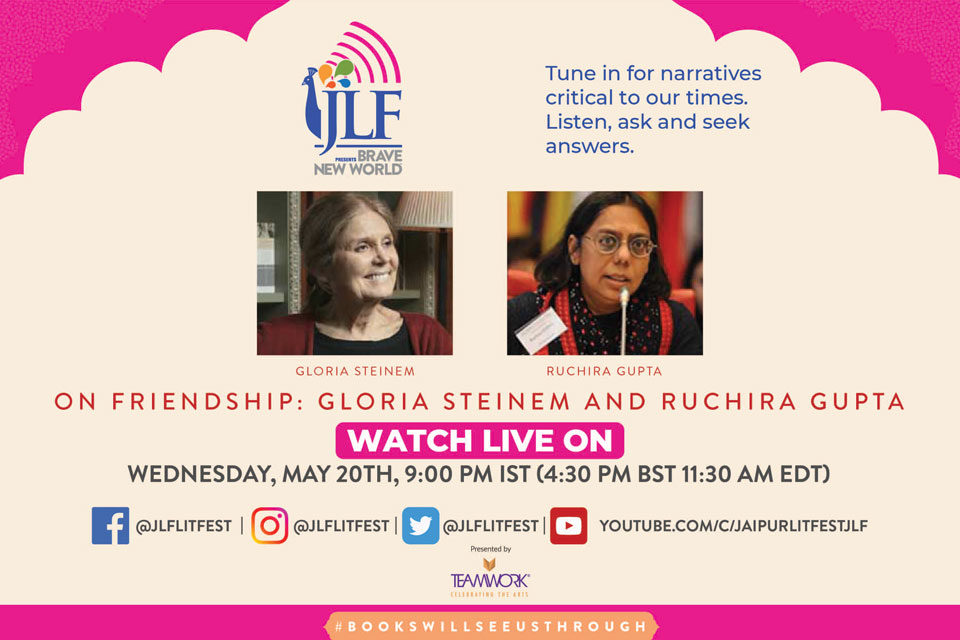 I was having a bad day on that Wednesday when legendary feminist icon Gloria Steinem spoke to Emmy-awardee journalist-activist Ruchira Gupta on JLF Brave New World, increasingly my go-to place for lockdown succour and diversion from deciding lunch menus and cleaning supplies. So, there had been a series of domestic mishaps and I was feeling caged-in by pandemic captivity and mundane tasks that lay ahead. And then swam up Gloria’s face on my laptop screen - serene, unruffled and just plain warm.  And when she said, “Friendship is a country; I have no faith in national boundaries which are new in human history. We have always roamed the globe since the globe existed…,” my spirits soared; I felt the heavy quagmire of mandated duties dissipate. After all, who decides what are duties anyway? And when there is friendship, can liberation be far away?

I listened in with rapt attention as the two women, quite obviously fuelled by a deep sense of friendship and tremendous mutual respect, spoke of sitting in a circle, listening to each other’s stories, a practice, according to Gloria, that had led to the women’s movement everywhere. They are both disarmingly honest when they introduce the vein of their friendship centred around a shared purpose of activism, women’s rights, a need to make things right, and of ideas which inspire them. Friendship is indeed an adventure, I realised, agreeing with Ruchira – it is discovery, joy and to me, an ability to be honest about what I am thinking, a strangely empowering and exhilarating tool.

Going back in time, Gloria mentions about her stay in India after she graduated from college in the US and how the most enduring among her friendships had been formed then (And yes, two of her friends from that timein India were watching the session!). I listened startled as she classified herself as “not even a 60s person, but a 50s person!” I grasped in my head the enormity of what she must have stood for when she championed the cause of the Women’s Movement in America which raged through the 60s & the 70s, her controversial exposé of a world inhabited by the Playboy Bunnies (a latter-day sting story?), choosing to have an abortion when she did, propagating the milestone idea of reproductive freedom for women, and the overpowering emotion she evoked when she wrote ‘After Black Power, Women’s Liberation’ in a country whose extent of women’s lib then was an hour-glass blonde in a Virginia Slims ad (“You’ve come a long way baby!) counterbalanced by the “Innocence is sexier than you think” messaging for a “feminine” brand of scents!

Have we really come a long way in standing up to one of the world’s most ancient forms of subservience – patriarchy – both subtle and overt, I wondered. But we have, haven’t we? Gloria was there in the 50s and she is still talking to us now along with her fellow activist and friend, 30 years her junior.

Interestingly, Gloria recounted how her activism in America was spurred by her learnings in India and not the other way around. When she left America of the 50s, it was a country of “conformity” with no civil rights movement to speak of. When she came to India, she discovered shared caring which she carried back to the US. I loved the way she used the term “shared caring” so effortlessly, heightening in my mind the need for empathy then and especially now.

I was also a wide-eyed fan girl when she spoke with loose-limbed matter-of-fact grace of her time in riot-torn villages in India, ravaged by caste violence, where she went, sari-clad,along with others, to help womenfolk who would accept help easily when it came from a woman. It was as if she was describing, with zero self-importance, something as easy as a walking tour, rather than what must have been a wrenching experience. Which brought to me a greater understanding of her humility when she mentioned the “Gandhian style of organising”, her instruction and takeaway from India. Her explanation of the Gandhian experience was succinct, crystal-clear– it made me wonder what the great hullaballoo about leadership is anyway when all you need to do to make people listen to you is to listen to them; to understand how they live, go and be with them. Instead of speaking from a lectern, follow a principle which is “visceral, balanced and equal”. Sitting in a circle and realising what has happened to you has happened to others – it’s really that simple – swapping life stories forms the backbone of all movements everywhere. That is a thought every one of us can relate to.

Speaking of her country now, she equates it to that dangerous time just before a change – like a battered woman in an abusive marriage about to leave home. She refuses to call Trump a real president, voted by an electoral accident by just one-third of a population resistant to change in age-old hierarchies and she sees hope in the fact that large tracts of people still believe in the movements of liberation which include women’s rights, the environment and the LGBTQ community.

Ruchira sums up the malaise of the modern world adroitly – she lines up the progression of patriarchy with clarity – from wanting a “strong head of the family” to looking for a political strongman who would bully his way through in keeping with the bulldozing we all swallow in every aspect of our lives as we toe the line so efficiently earmarked for us. Gloria takes that thought one step forward when she unflinchingly defines patriarchy as a man’s way of controlling a woman to be in charge of reproduction. “Unless we have democracy inside the home, we arenever going to have democracy outside the home.” This was my cue to mentally make a note to play this conversation on a loop to my houseful of boys!

Their conversation flows without any awkwardness of being on stage, albeit of a virtual one, a testimony to the “comfort zone” friendship gives, veering between marvelling how Covid has decimated boundaries of class, race or caste while yet making monsters of some who are blinded by prejudice, how the “essential workers” in Gloria’s enchanting words “aren’t the Gods of Wall Street” anymore, how friendships aren’t formed on the basis of sameness but from difference (“I learn the most when I listen, not when I talk” – this from the lady who was the first woman to address America’s National Press Club in 1972!), how gender plays no role when you repose your trust in someone and how the future is the “next minute” to be viewed as a tree “bottom-up” and not a larger-than-life tract of vast land.

While Ruchira spoke of her Gandhian father as an inspiration for her fearless activism in a world full of divisions and of the sheer courage she gets from Gloria, I saw the present as a meaningful way to “seize the day”, to make a difference in ways that we can.

And finally, when Gloria said, “laughter is the only free emotion”, which cannot be compelled like fear or even love when enmeshed with duty, I smiled. We will always have laughter, for ourselves, and for others – friendship is indeed a country of laughter, hope and assistance.