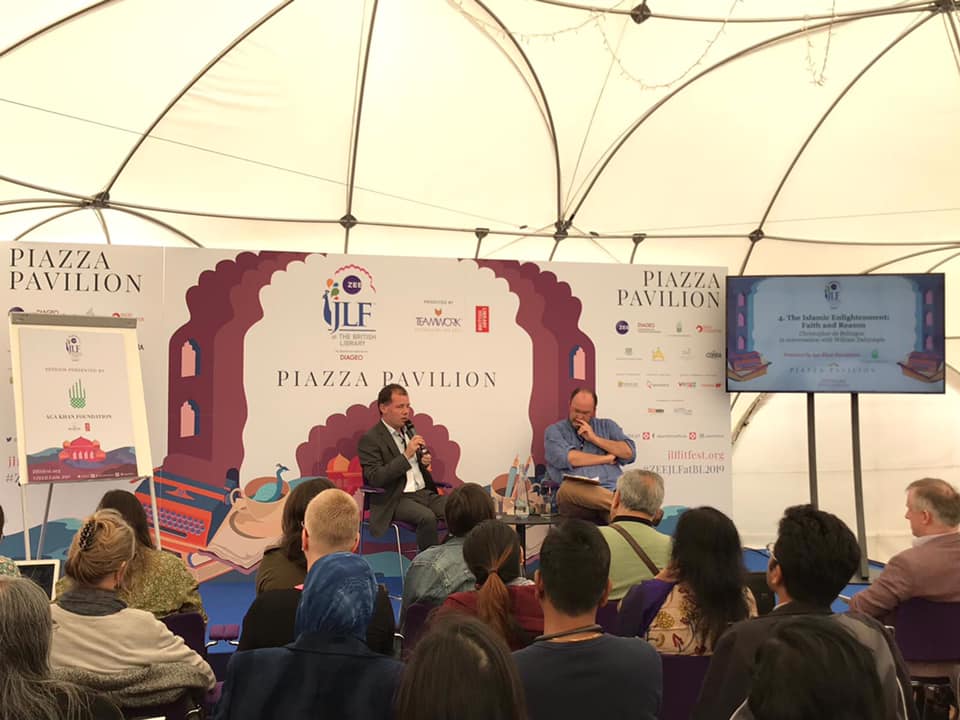 For the first session on the Saturday morning of the ZEE JLF at The British Library Festival, the audience at the Piazza Pavilion were treated to an engaging and enlightening discussion between de Bellaigue and Dalrymple, on the topic of tensions between faith and reason throughout the history of the Muslim world. The discussion centered on the themes elaborated in De Bellaigue’s book, The Islamic Enlightenment.

De Bellaigue, an author and journalist who has worked extensively across the Muslim world, noted that he was inspired to write his book in response to the growing perceived wisdom in response to 9/11, propagated by writers such as Bernard Lewis and Francis Fukayama: namely, that the values of Islam were incompatible with those of modernity.

During the discussion, De Bellaigue noted the interconnectedness between the Islamic world and the Western world throughout early modern history. He highlighted key historical social, political and technological changes that took place, charting the exchanges of ideas across geographical borders, as well as key reforms, the impact these ideas had on society and social structures. A key example was the introduction of technology for the mass production of paper, brought to the Abbasid Caliphate from the Chinese prisoners of war taken, after the clash between the Arab and Chinese forces as a result of the Battle of Talas.

De Bellaigue is particularly intrigued by the “ebb and flow of technology and ebb and flow of admiration and emulation” which travelled back and forth between the Islamic and the Western world, for example through the Al-Mukhtor, which brought ideas about Halley’s comet or Darwin’s writing on evolution to a diverse audience from Iran to Egypt.

Other examples of the interconnected of ideas between the West and the Islamic World highlighted by De Bellaigue, include the journey of Abbas Mirza, who wrote of the narratives of progress he encountered in Georgian England in letters to his crown prince. Subjects highlighted include the importance of the rule of law, which applied to all, ruler and subject alike, and the inability of the crown prince to get his way outside of legal and institutional structures.

De Bellaigue notes that the hyper modernisation of the European armies, and the swift and brutal defeat at the Battle of the Pyramids, marked a key turning point for many of the rules of the Islamic world, who feared invasion by armies which were more modern and more powerful than theirs. Often, De Bellaigue notes, modernising needed an intellectual strongman, such as Sultan Mahmood in Turkey. While reform began with the army, change and modernisation happened across the board, from weaponry technology, to discipline, to health and medicine. The authoritarian rulers of the Islamic world began to modernise, inspired by the West. The ideas also spread through the rest of society, as noted for example in the change from mass disease been seen as God’s Will, to the idea that it is God’s will that that society fights, innovates and survives.

Further modernising changes are driven by technology. The introduction of the printing press meant women were able to write and receive communication without leaving the house, which in turn led to a series of changes which made it much more normalised for families in Egypt for example to start educating their daughters.

In response to Darymple’s concluding question, on where the notion of Islamic Enlightenment fits into today’s world, De Bellaigue noted that the impact of technology and climate change are becoming much more significant drives of change and will be the lens through which future history is written. Technology and change both impact societies equally, irrespective of religion or geography, lead to even further interconnectedness.